When people think about floods, they’re generally imagining something like heavy rain, flashes of lightning, and a massive downpour of water. Flood insurance coverage is a necessity for areas that experience this type of weather, but did you know that snowmelt can be a major cause of flooding? Deep snow can melt very quickly when temperatures fluctuate, resulting in major problems which is why flood insurance coverage is a necessity for homeowners in areas that get a lot of snow. 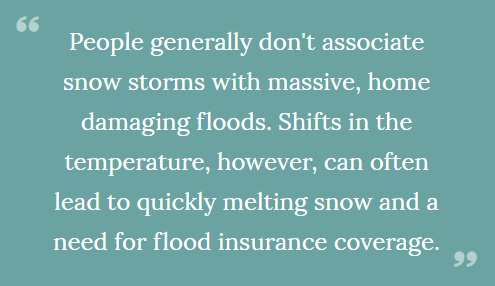 Freezing temperatures lead to a frozen ground and when the ground is frozen, the soil can’t absorb as much water from snow meaning the risk of a flood is increased. Many of the biggest floods in the history of the western United States are caused because in addition to snow already being on the ground, rain falls which causes an excess of water. This, of course, leads to flooding. Even though there hasn’t been a flash flood, the excess water from the combination of the snow and the rain can lead to disastrous flood before you know it.