Get Private Flood Insurance & Save Money Too.

By buying private flood insurance our clients save on average $500 to $1,457+ on their annual premiums.

In many cases, they save even more. 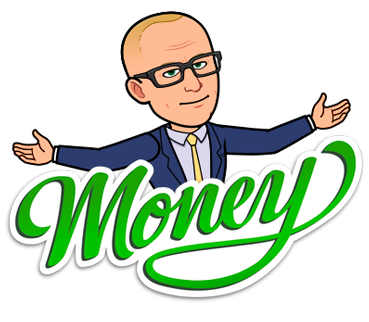 "Same Coverage at a Better Rate"

Flood Nerds will shop the private flood insurance markets and then compare them to the NFIP, guaranteeing you the better option. We will send you the cheapest flood insurance rates within minutes. 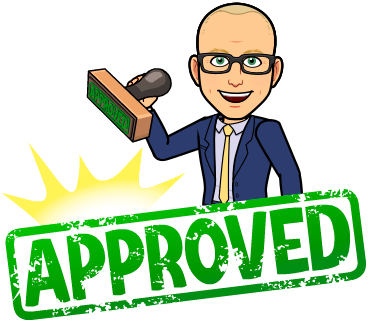 Paying for low-cost flood insurance is awesome. And letting the Flood Nerds shop your property has other benefits – you can get better coverage while saving money, and you can get it fast. 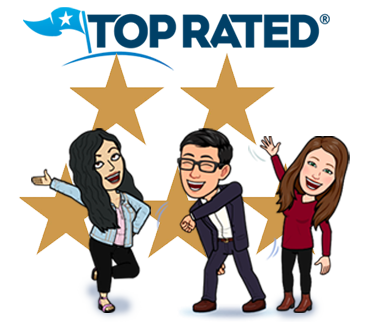 "Would highly recommend Better Flood for your flood insurance needs."

Get a Quick Quote

Where to Buy Flood Insurance that is Affordable

Click on image to see how much we have saved for our clients. Then Let us find your savings.

Find Out the Cost Difference Between Government and Private Flood Insurance

Government Flood Insurance is a Mess

Since the government established the National Flood Insurance Program (NFIP) in 1968, most of the flood insurance coverage in the US has been administered by the Federal Emergency Management Agency (FEMA). When the agency isn’t  busy cleaning up after tornados, fires, and floods they dabble in flood insurance. And they don’t do such a great job.

The NFIP is set to expire almost every year and as the latest of their extensions runs out. They’ve managed to rack up over $20B in deficits. Typical of a government operation, they way overcharge some people and undercharge others.

They lure developers to build in areas at high risk of flooding and then bail them out when the inevitable flood happens.

If a gridlocked Congress doesn’t renew the NFIP regularly, there could be claims that never get paid.

In 1983, the NFIP started the “Write Your Own” program. This allowed the major insurance companies like The Hartford, Allstate, State Farm, etc. to issue NFIP policies under their own logo. It was still the same mess, just with a new logo. That’s NOT real private insurance.

Then in 2012, Congress acted to allow private insurance companies to rate and write their own policies. And since late 2013, the private flood insurance market has been growing.

The NFIP generally overcharges 50% of the flood insurance property owners and undercharges the other 50%. No matter who you are, you probably are paying the wrong amount.

But most insurance agents don’t understand private flood insurance because it is more complex than standard homeowner’s insurance. If you ask them to get you flood insurance, most will just give you one of those NFIP policies under their company logo.

But Flood Nerds thrive on complexity. We love base flood elevations, floodplain maps, and the ins and outs of grandfathered flood zones. Flood Nerds know and understand the private insurance market. That’s how we can save people money with REAL private flood insurance. 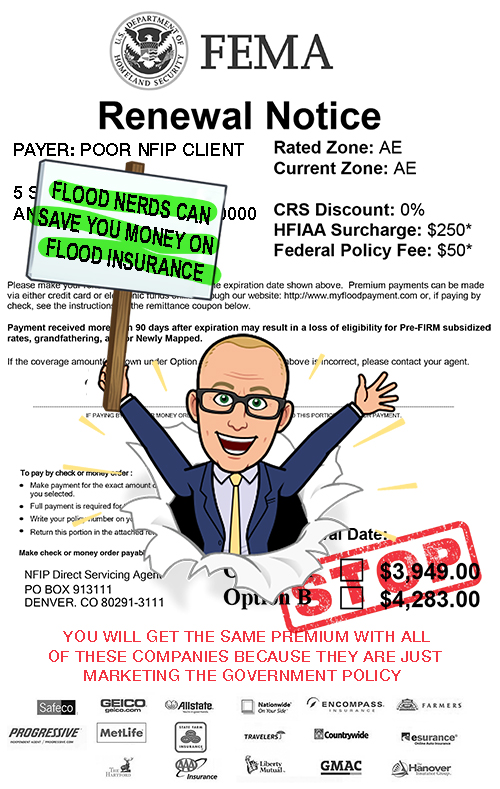 The private flood insurance market is competitive and innovative. And they know how to use technology. Our government agencies aren’t really known for products that are competitive, innovative, or packed with technology unless it’s for the military. Right?

Because the NFIP had a monopoly until 2012 they didn’t even think about being innovative or using technology to create products that benefit the insurance-buying public.

Nope, the NFIP solely relied on flood maps created by the Army Corps Of Engineers. And many of those maps are more than 50 years old. The NFIP program created a one size fits all plan that doesn’t fit almost anyone.

FEMA’s idea of innovation is to have property owners pay $600 or more for a piece of paper called an Elevation Certificate that may or may not get you a better rate. Wow! Talk about innovation……not! 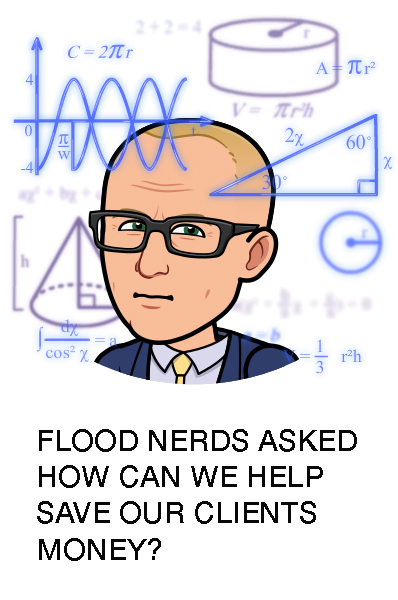 They use technology from satellites and aircraft to create maps that accurately reflect the topography of the land to better understand the risk of flooding.

Then they take those maps and use computer models to create multiple flooding scenarios. This risk modeling stuff is way cooler than those old paper maps AND the private insurers get a more exact picture of how an area would flood.

Technology lets the private insurers better determine where water is going to go and identify the properties that are really at the highest risk of flooding.

With technology, the private flood insurance market can determine the real risk of flooding and calculate the actual cost of flood insurance. They save millions of homeowners and businesses money.

Real data is really important to saving you significant money on your flood insurance.

With over 40 private flood insurance companies to shop, Flood Nerds can tailor your coverage to your unique needs.

The NFIP makes you wait 30 days for coverage. If you are buying a home that can really mess up your closing date!

Waiting periods for private flood insurance are as short as 10 days or 15 days and the Flood Nerds even know about options with no waiting period!

Your loan will close on time when you get Better Flood Insurance from the Flood Nerds.

The private flood insurance market lets you cover more of your assets. And insurance is all about CYA (covering your ass-ets) 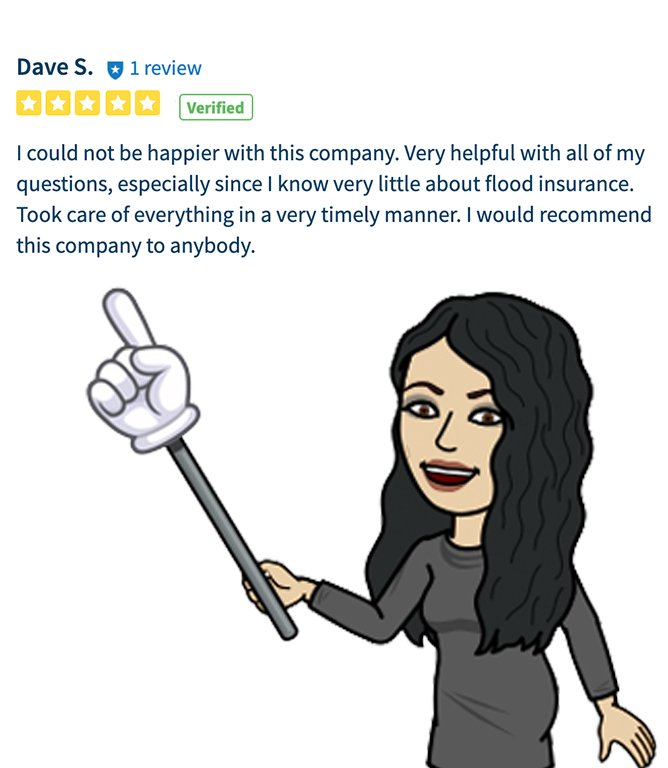 With some private flood insurance you can get coverage for:
• Actual replacement cost of the structure
• Temporary living expense coverage
• Basement contents (Limited but better then nothing)
• Pool repair/refill
• Higher coverage limits on detached structures

Private flood insurance offers higher coverage limits too – up to $2,000,000 for your home and $500,000 for your personal items. Not all policies cover all things. So tell your Flood Nerd what is important to you (maybe you don’t have a basement but need to cover the pool) and we’ll shop for the coverage you want.

Get a Free Quote from Flood Insurance shoppers – The Flood Nerds

Better Flood Insurance starts with a free quote from the Flood Nerds.

Your personal Flood Nerd will shop the private flood insurance markets and then compare them to the NFIP and guarantee that you get the good option. We even have tricks in our pocket protectors to save with the NFIP coverage too.

As with a homeowner’s policy, most business insurance policies do not cover flooding.

The only way to get coverage is with a stand-alone commercial flood insurance policy.

About 25% of small businesses never reopen following a natural disaster.

Protect your business and inventory with private flood insurance. 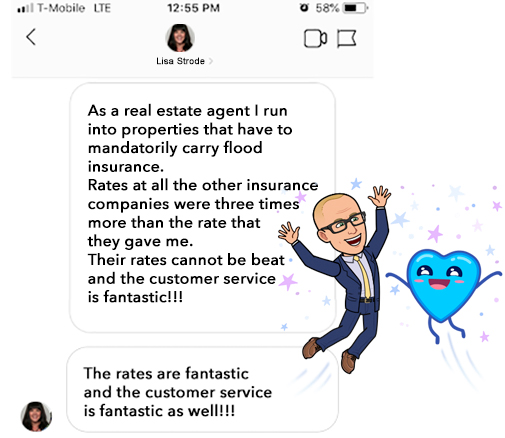 Flood Nerds find you an good policy and a good price.

Private flood insurance companies comply with all government and FEMA guidelines. Your lender will approve your policy, and you’ll close on time. We can get a policy the same day we receive payment making the process of buying a property that requires flood insurance cost-effective and straightforward. 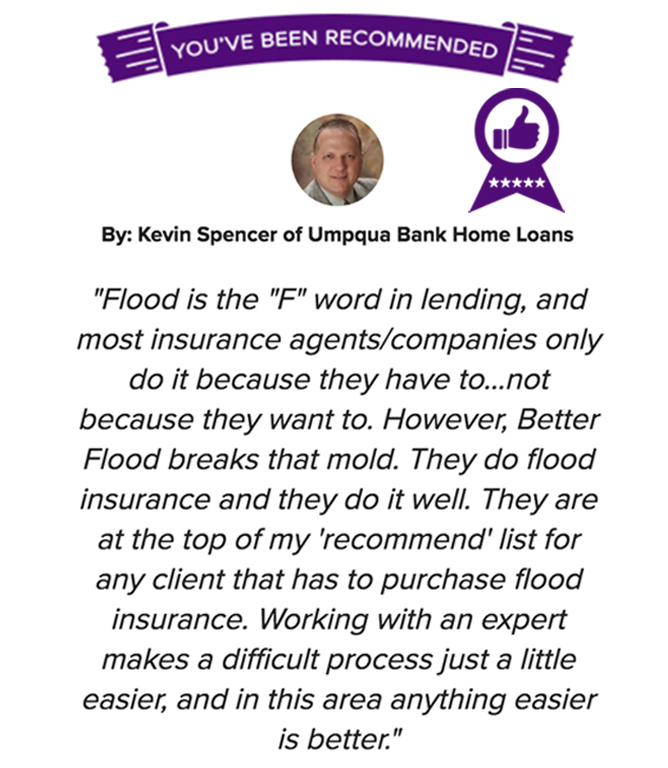 Remember the private insurers aren’t relying on those dusty old and outdated paper maps. They use the latest technology to assess the rate. They don’t need no stinking badges or Elevation Certificates to determine the risk of flooding.

This technology saves money for millions of NFIP policyholders.

Private Flood Insurance is the Alternative to Excess Coverage

NFIP only lets you buy $250,000 worth of coverage. With property values and the cost of rebuilding going up and up, $250,000 in coverage doesn’t go very far any more.

Before private flood insurance, if your NFIP policy was maxed out at $250,000 and your property was worth way more you had to buy Excess Flood coverage.

Private flood insurance can save up to 50% on the premium over the NFIP in certain situations. Private flood can be cheaper than NFIP, especially in the A and V flood zones.

On average, we find savings of $250 – $2,500 for residential flood insurance and unheard-of savings for commercial properties. 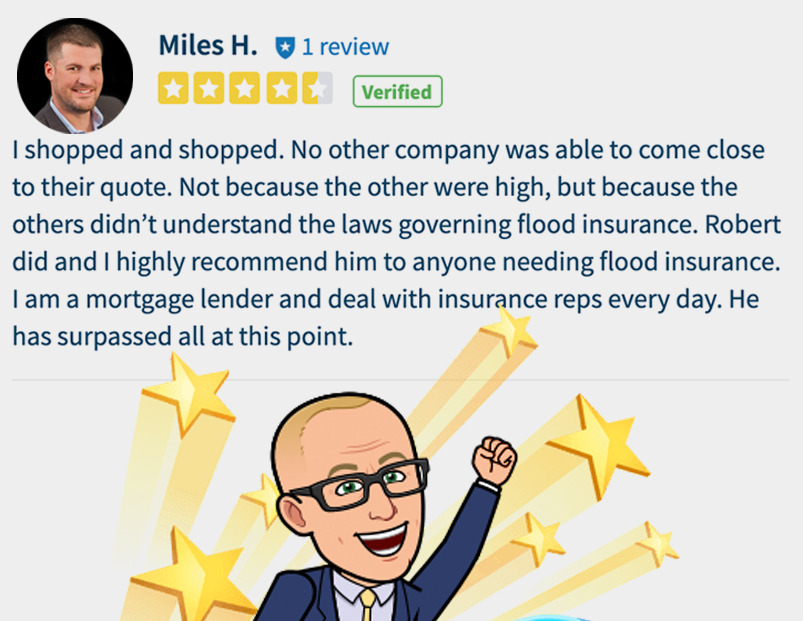 Standard private flood coverage
• The building that is listed on the policy.
• If the home is your primary residence, you may have coverage for loss of use
• Personal contents, which protects the property or possessions inside your home.
• For commercial properties, you can buy coverage for loss of use or loss of business. Tell your Flood Nerd to shop this coverage.
• It may include cleaning up/repairing the swimming pool

Instead of congratulating you for owning a second property as an income producing property or a vacation home, the government flood insurance punishes you. The NFIP policy has different rates that are higher rates and added fees for a second home investment property.

Some private flood insurance does not penalize you for a second home.

The NFIP does. If the property is in a flood zone, the NFIP policy automatically slaps on a $250 fee on top of the already high premium. This is wrong.

Private flood insurance companies do not charge a $250 penalty for an additional home. That is the right way to do business. 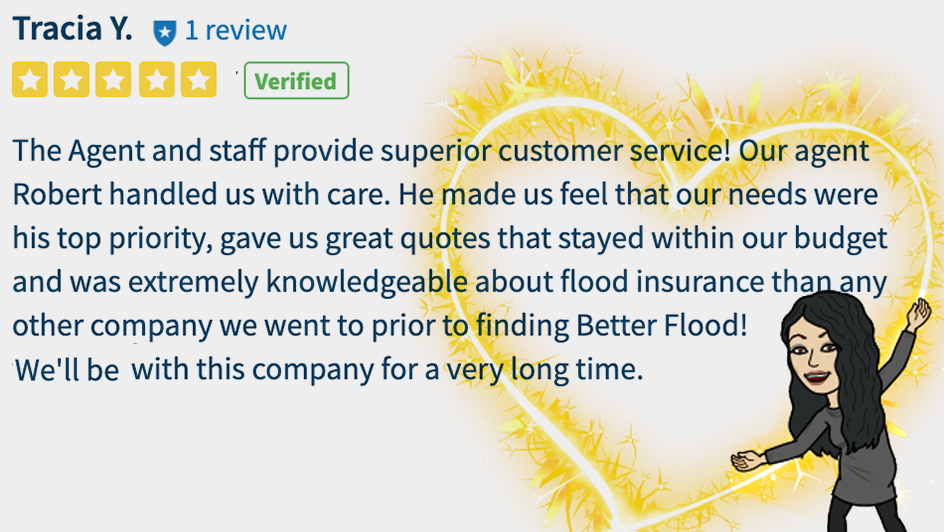 If your property has never had a flood loss before private flood insurance will cost less and provide even better coverage.

Flood Nerds study all the ins and outs of flood insurance so let us get you a free, no-obligation quote today. We’ll even scope out the Lloyds of London syndicate for you.

We have access policies that have been with us for 20 years. Check out our reviews.

Any Property Can Flood

But a house in any location can flood.

Just because the mortgage company or bank doesn’t ask for flood insurance doesn’t mean you don’t need it.

Wherever it rains, it can flood, and you don’t even need to be close to a lake, ocean, river, or creek for your house to flood.

Every year, 25% of all flood claims are in areas that are not in the high-risk flood zones (A or V).

Don’t feel a false sense of security because your structure is outside of a high risk area or your lender doesn’t require it. Feel real security with flood insurance. 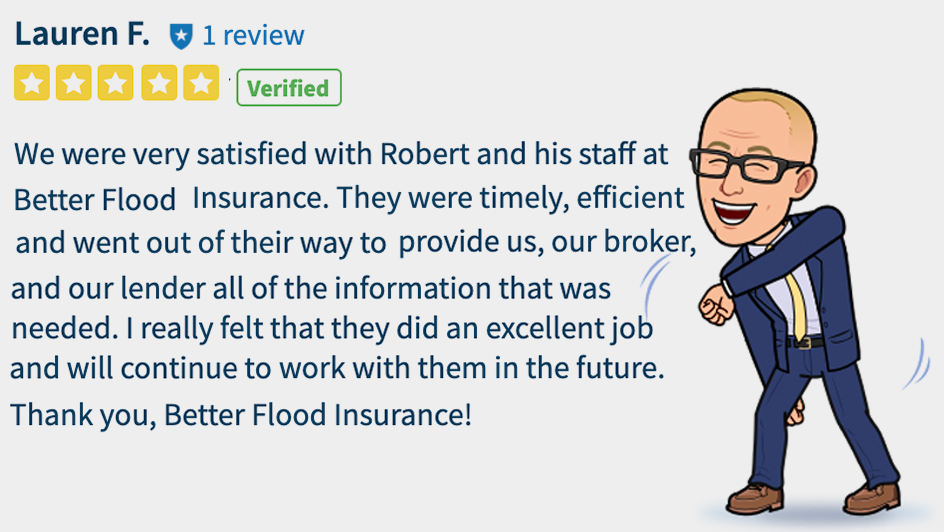 Deductibles often are higher on private flood policies than with the NFIP. Now some people think that is a downside, but honestly you NEVER want to turn in a small claim for loss under a flood policy. If you do that, you may be out of the private flood insurance market for 5 years or more. And when forced back into the NFIP it’s going to cost a small fortune over those years.

With private flood insurance you run a small risk of having your policy non renewed because their underwriting parameters change. When Better Flood Insurance shops your policy, if this ever happens, we will find you another option or two.

There are times when the NFIP has a better price than the private flood market. For example, if your policy is grandfathered for a prior flood zone, then the NFIP will subsidize the insurance policy. How do you know if this applies to your property? You ask a Flood Nerd. They know more about grandfathers than a nursing home!

Another significant reason to stay with the NFIP has to do with flood zone map changes. If your policy moves into a high-risk flood zone you can get a subsidy for part of the premium if you act fast. And Flood Nerds operate at the speed of light. And if you can get one of these subsidized policies, you can even transfer it when you sell the house.

Can You Afford to be Uninsured or Underinsured?

The average flood insurance claim is $46,000. If you don’t have that much money in savings, you are one flood away from financial disaster. You seem like a nice person, I would hate for that to happen to you.

That new iPhone may be nifty, but it won’t rebuild your home after a flood loss. Get flood insurance first and then get that new iPhone!

Flooding is the most common and costly natural disaster. 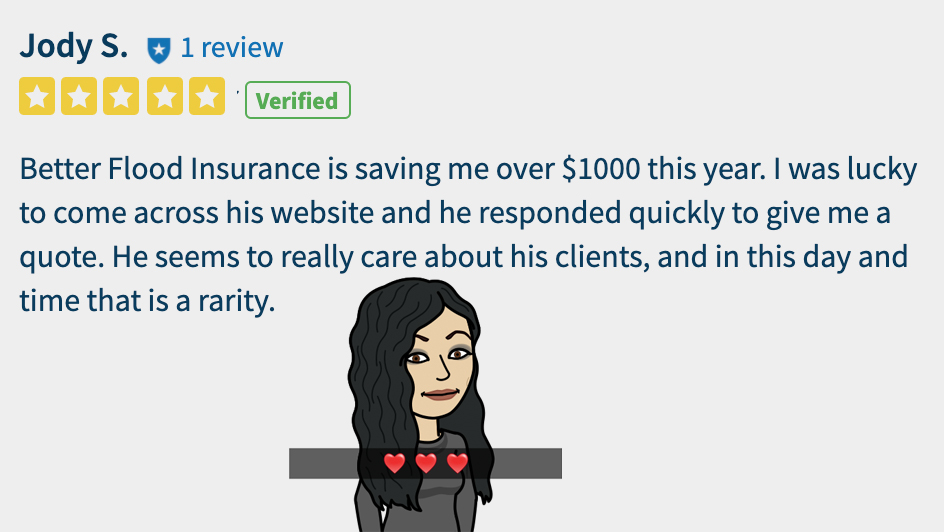 Here’s the cost of flood damage from recent floods 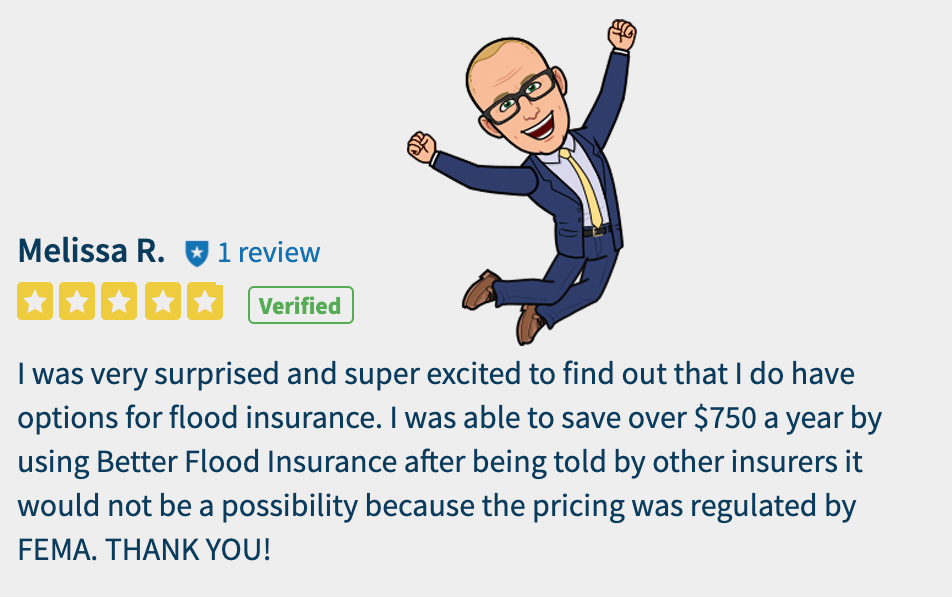 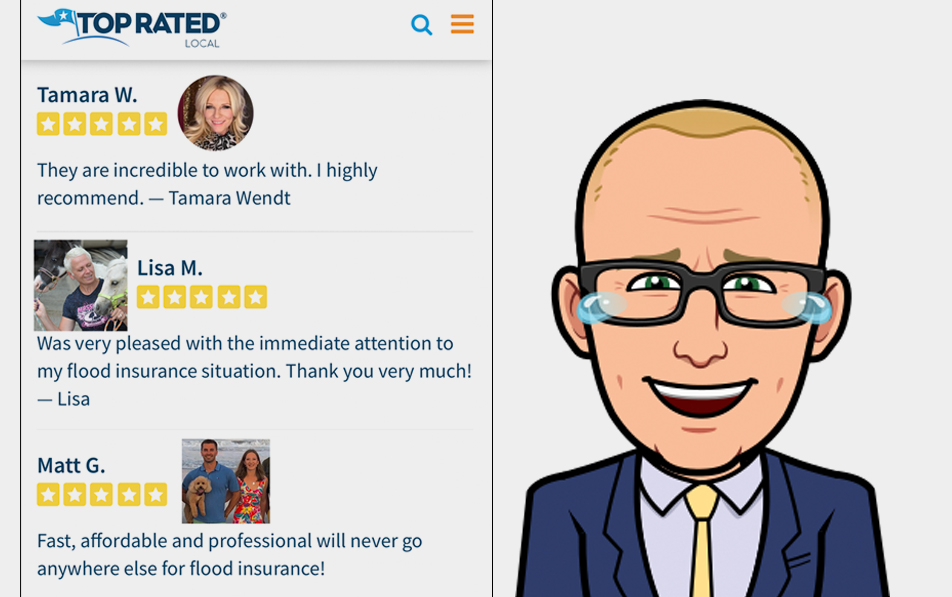 What is Private Flood Insurance? 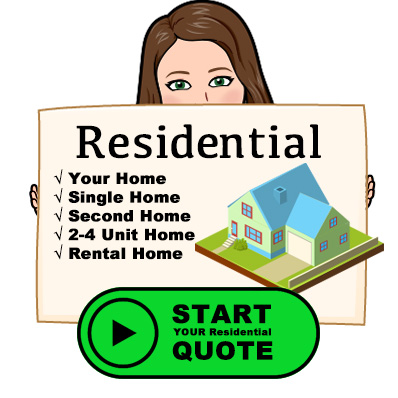 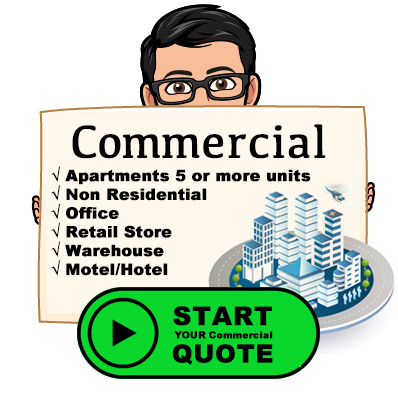 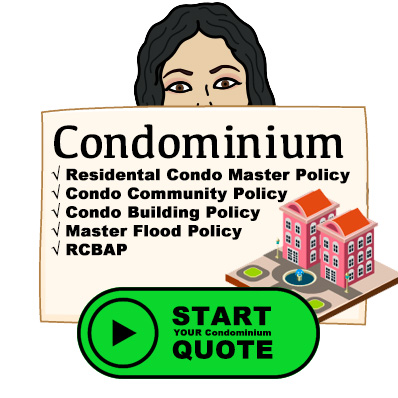 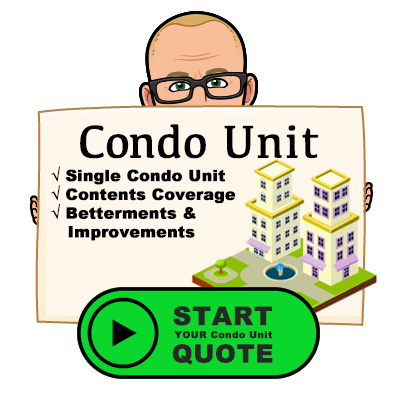