Flooding is the number one natural disaster we face in the U.S.

All it takes is a few inches of water to cause catastrophic damage to your property.

You could see your financial future destroyed with the flood floodwaters.

We have had clients tell us they wish they had bought the flood insurance before it happened to them.

Many had to take on second jobs, forgo retirement or in the worse cases dig into their retirement to repair their home after the floodwater has damaged it.

You can get flood insurance for as little as $1.50 a day.

In this blog, you will understand

We are hoping that this article will convince you of the need to get flood coverage, what flood insurance maps are and how they affect your insurance rates.

Please note that our government’s flood maps are not definitive and mother nature will put the water where ever she wants.

The only way to protect your financial future from floodwaters is to buy a flood insurance policy allowing you peace of mind and security that in the event that this very realistic event happens you are covered.

What this means is that any given day you have a 1% chance of flooding it doesn’t mean that you are safe from flooding for 99 years.

Check out these two articles we wrote on this topic.

The myth of the 100-year flood

The NFIP has had a monopoly since 1973

What a 50-year monopoly will do to the industry as well as hurt consumers believe in a product.

I suppose we should start with what is a flood insurance rate map and how the government policy (the NFIP) would affect flood insurance premiums for more than five decades.

In order to get a FEMA flood map, FEMA generally, works with local communities an counties to establish the areas that are at high-risk of flooding.

These flood maps are for floodplain management, flood insurance and is how the NFIP comes up with their premiums, these flood zones also determine whether or not your lender will require flood insurance.

Am I in a flood zone?

In most cases, the flood maps will show the communities flood zones, the floodplain boundaries and the Base Flood Elevation (BFE) which is how high the floodwaters are determined to go.

You can find your communities flood map here (https://msc.fema.gov/portal/search)  by putting in your address you can view where your property sits in regard to FEMA’s established flood map.

However, it is good to note these maps can’t keep mother nature from flooding where ever she darn well pleases.

Anywhere it rains it can flood.

Most of the recent claims we have had are in areas that are considered low to moderate risk.

Using the Flood insurance risk map provided by FEMA your lender will review them to see if you are required to get flood insurance when you are purchasing a new home due.

This is due to a federal law that any lender that is getting access to or backed by federal money (and very few are not) will have to get a flood zone determination (FZD).

The FZD is an official document that tells the lender if they are going to have to require flood insurance on your property or not.

If the property is in a high-risk flood zone map usually identified with an A or AE flood zone or V or VE flood zone.

Then your lender will require you to get a flood insurance policy prior to giving you the loan.

Newly mapped flood zones and flood maps that are changing.

As FEMA trys to keep up with the changing flood zone due to new land use and community development or changing weather patterns they will update maps from time to time.

Although these changes usually take 5 years to become effective and well they are kind of out of date by them they get into the community.

One thing to consider if you are in a community and your flood zone has changed from a low to moderate flood zone (X flood zone) into a higher risk flood zone (A or AE Flood zone).

If you were to buy a flood policy from the NFIP within a calendar year of the effective date of the map change, you can get a hugely subsidized policy.

This is something that realtors and homeowners that are looking to sell their home within the next few years should strongly consider.

What this means is that you can get a flood policy that is $500 and as long as the new buyer of the property keeps your current policy then they too can keep your savings.

By getting a killer rate it takes the “risk or insurance cost” out of buying a home in a flood zone.

Only flood insurance expert can figure out how to make this happen.

Just know it can be done.

With essentially no competition for half a century, the vast majority of residential and commercial flood insurance policies are with the NFIP however this is about to change, the private flood insurance companies are using the latest inland flood modeling tools.

Flood risk management and flood risk mapping have been with the Federal Emergency Mangement Agency (FEMA), and have overseen the development of the flood risk maps across the country.

These flood maps were intended to be used for disaster preparedness, specific guidelines, and building codes for structures erected after 1973.

And ultimately were used by the NFIP to set rates for the flood zone based on the map.

Anything in a higher risk flood zone map would pay a higher premium while those in the so-called low to moderate flood zone would get massively subsidized flood policies.

These subsidized flood policies allow the property owner access to premiums that are greatly reduced as to the risk.

How can this be?

Although the government has put significant resources into developing these maps frequent flooding outside of these designated flood zone, and the fact that the NFIP is withholding the information and data they have collected over their 5 decades.

I ask why is the NFIP so reluctant to share this very valuable information?

The private flood industry has chosen to not rely on the maps the government has created due to the fact that many are out of date and don’t take into consideration new construction that has to concreate, buildings and essentially changed the way that water will flow. 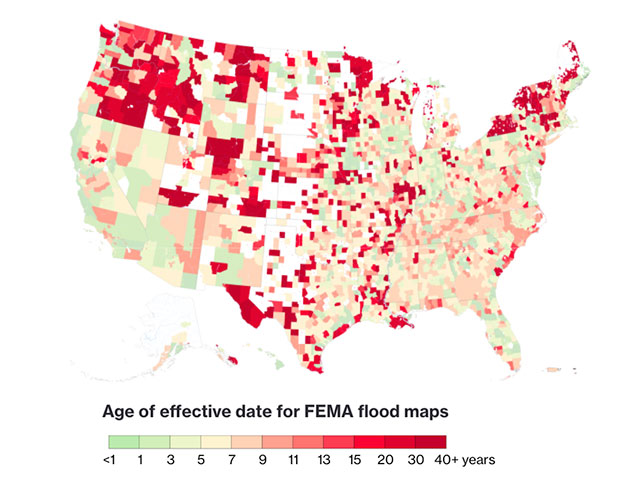 Another problem we discovered with the government’s flood insurance rate based on the maps is that it is a one-size-fits-all solution if a property is in say an AE flood zone then they all pay essentially the same premium for their flood coverage.

Flood risk can change from one house to the next or even within a few feet as it depends on many factors.

For instance the typography of the land and how it is used, the soil type as well as the flood prevention and mitigation that has been done by the local community.

It takes up to 5 years to get a new flood map in effect.

This is due to negotiations that the FEMA officials and local governments essentially “redraw the flood map” to fit their political view.

You see the flood map specifically the ones that will require property owners that have a loan to purchase flood insurance are unpopular.

In addition, if a new area is being developed, it would cost more or be harder to sell homes that will have to buy a flood policy right out of the gate.

So there is a bunch of lobbying going on during these five years.

What makes me most concerned is that many property owners feel as though they are safe if they are not being required to purchase a flood policy.

FEMA loves to say the 20% of all flooding events any given year are in these low to moderate flood zone maps.

In fact, most of the recent flooding we have seen Houston, Flordia and the Midwest the properties did not have flood insurance leaving these property owners having to bear the financial weight of many of which will never recover.

And you will have to buy flood insurance to get access to this loan.

What Flood Maps do private market flood insurance companies use?

With the private flood insurance market, they are using the latest technology, including a better understanding of the physics behind flooding, high-resolution data and increasingly more powerful computers.

We shouldn’t discredit all the work our government did to get better on understanding flooding, which includes improved understanding of how water flows over the floodplains which allow for realistic flood modeling.

To explain water physics further when water stays within the river banks we can generally assume that it will flow in one direction (downstream).

However, when the water breaks the river bank all assumptions change water is now flowing in multiple directions.

By running laboratory experiments and improved computer-aided modeling techniques in our understanding of the multidimensional water flow.

Which allows us to develop realistic flood maps and models.

This is where I am going to get really nerdy with the science of hydrology.

They put all this data into high-tech computers, overlayed on the topography maps, most of which can get to the resolution of 10 meters or higher, on satellite image and laser sensing capabilities.

Combined with land use information (including forecasted improvements and building).

To put it simply with better data the private market has a better understanding of the very small scale characteristics that change a flood risk.

Now the fun comes by combining all that data with multidimensional flood modeling the powerful computing techniques can play out different scenarios within seconds.

Flooding was considered an uninsurable risk

When the NFIP was founded back in the late 60’s early 70’s flood was considered an uninsurable risk.

We know have the ability to indicate if a location is in a 20-year flood zone.

And charge a premium based on that map risk accordantly.

The private flood insurance risk maps can model more than just the river flooding it allows insurers to map what heavy rainfall would do how the floodwaters would go and they are finding that many of the low-risk areas in FEMA’s designated flood zones should be upgraded to a high-risk flood zone.

They have overlayed the risk modeling on the financial model giving them a clear picture of annual expected losses and well as loss frequency for any single risk.

This will allow insurers to better control their flood risk.

They can now underwrite, flood risk with confidence that wasn’t there before now.

The United States private flood market is relatively new since 2012 however most of the companies coming in are not new to insurance.

Lloyds of London Flood Insurance and many are already insuring other places in the world for the risk of flooding.

The private market flood insurance rate maps have found that in many cases, flood insurance can be provided for significantly less and at better terms then the NFIP policy.

This is good news for those that have to buy flood insurance.